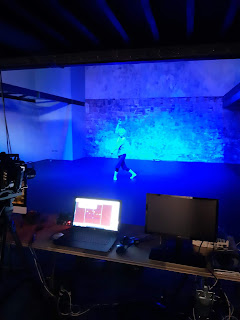 Northumbria University is collaborating with Northern Dance to develop a new project in which all media will be controlled by the movements of a single performer in real-time.

This project is being developed at Northern Dance’s new renovated space in the Ouseburn. David Leonard the key driver and principal owner of the parent company Paper Dove, and is collaborating on the music for this project. Mike Chilton is the key player developing the artistic design of the project.  Dancer Maxine Fell, who trained at the Northern School of Contemporary Dance, will control all of the media with her movement. Alexander Gill, currently at the Royal Academy of Music, is designing music and soundscapes to work with the audio system. Steve Gibson from Northumbria School of Design is creating the interactive mapping for control of the media by the dancer, and collaborating on the music. The piece is being proposed to high-profile venues such as the Sage in Gateshead. 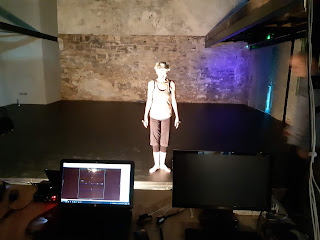 This project will create an interface that will allow users to interact with audio, video, lighting and Visual FX in real-time and will do so in a non-linear manner (i.e. allowing for different user experiences) without sacrificing rendering or playback quality. The project will be genuinely multi-disciplinary involving interaction design, dance, animation and Visual FX, and fine art. The key technological innovation will be enabled by the development of the GAMS motion-tracking system. In brief, this system uses infrared trackers (four are possible in the current configuration) and infrared cameras to track users in a space measuring up to 15x15 metres. A GUI-based software can be used to design space so that sound, video, animation, lights and Visual FX can be accessed at different spots in the room and manipulated by the movements of the user.


The lead partner, Paper Dove Company, is a design-led card publisher working with a range of major charities. Twenty years old, the company is majority owned by David Leonard, a graduate artist with an interest in bringing together art and technology in powerful and emotive ways. He has recently established a charitable company - Northern Dance - to make high-quality dance accessible to the public in the North East, keeping local talent in the region. The project is a partnership between Paper Dove Company (as lead) and Northumbria University providing technical development of GAMS. The project is supported by funding from Creativity Works (now Creative FUSE), with funds from the European Regional Development Fund.

Below is video documenting the initial results of the collaboration:

For more information, contact Steve Gibson at Northumbria University!
at November 29, 2018 No comments:

Email ThisBlogThis!Share to TwitterShare to FacebookShare to Pinterest
Labels: immersive

The PROTO Emerging Technologies Centre in Gateshead had its official opening on November 1! The event was opened by Gateshead Cllr John Adams, who was joined by speakers from Unity, the Digital Catapult, Pocket Money Games and many others, as well as demos and exhibits from local companies.

Professor Lars Erik Holmquist joined a panel that included hedgehog lab, the North East Tees Valley Immersive Lab, and was lead by PROTO Innovation Manager Alex Cook. Lars Erik talked about the importance of long-term research to create truly ground-breaking innovations, such as the tablet computer and the head-mounted virtual reality display, both first envisioned some 50 years ago.

Thanks for a great event and we look forward to many fruitful collaborations!

Email ThisBlogThis!Share to TwitterShare to FacebookShare to Pinterest
Labels: immersive, PROTO, VERS
Newer Posts Older Posts Home
Subscribe to: Posts (Atom)
Click here to join our mailing list!
In the Digital Disruption Network, companies and organisations work together with academics to explore deep, future-oriented research questions related to emerging digital technologies. Follow the links above to learn more about the network, our partners, how to join, and how to collaborate and do research with one of our Special Interest Groups!